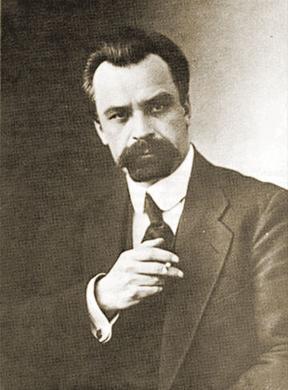 Volodymyr Vynnychenko was a Ukrainian statesman playwright, activist and artist, who also served as the country's first prime minister in 1919, a post he held during the brief existence of the Ukrainian National (or People's Republic). After the February Revolution of 1917, Vynnychenko served as the head of the General Secretariat, which was the Russian Provisional Government's representative executive body in Ukraine. He was authorized by the Central Rada of Ukraine (its parliament) to conduct negotiations with the Russian Provisional Government during this time.

Vynnychenko is the one of the primary authors of the "The Third Universal," which was written on November 20, 1917. An original broadside of this document is a featured item of the Ukrainian Museum-Archives' collection in Cleveland. Addressed to ‘the Ukrainian people and all the peoples of Ukraine,’ the Third Universal proclaimed the creation of the Ukrainian National Republic within a federated Russia of equal and free peoples. This document quickly became moot after the Bolshevik's denounced it and moved troops into Ukraine, where a battle for the control of that territory would be waged for a number of years. While the Third Universal envisioned greater autonomy for the nine southwestern provinces of the Russian Empire, the Fourth Universal was a declaration of independence, creating irreconcilable visions for the future and laying the groundwork for more than a century of opposition to Soviet communism.