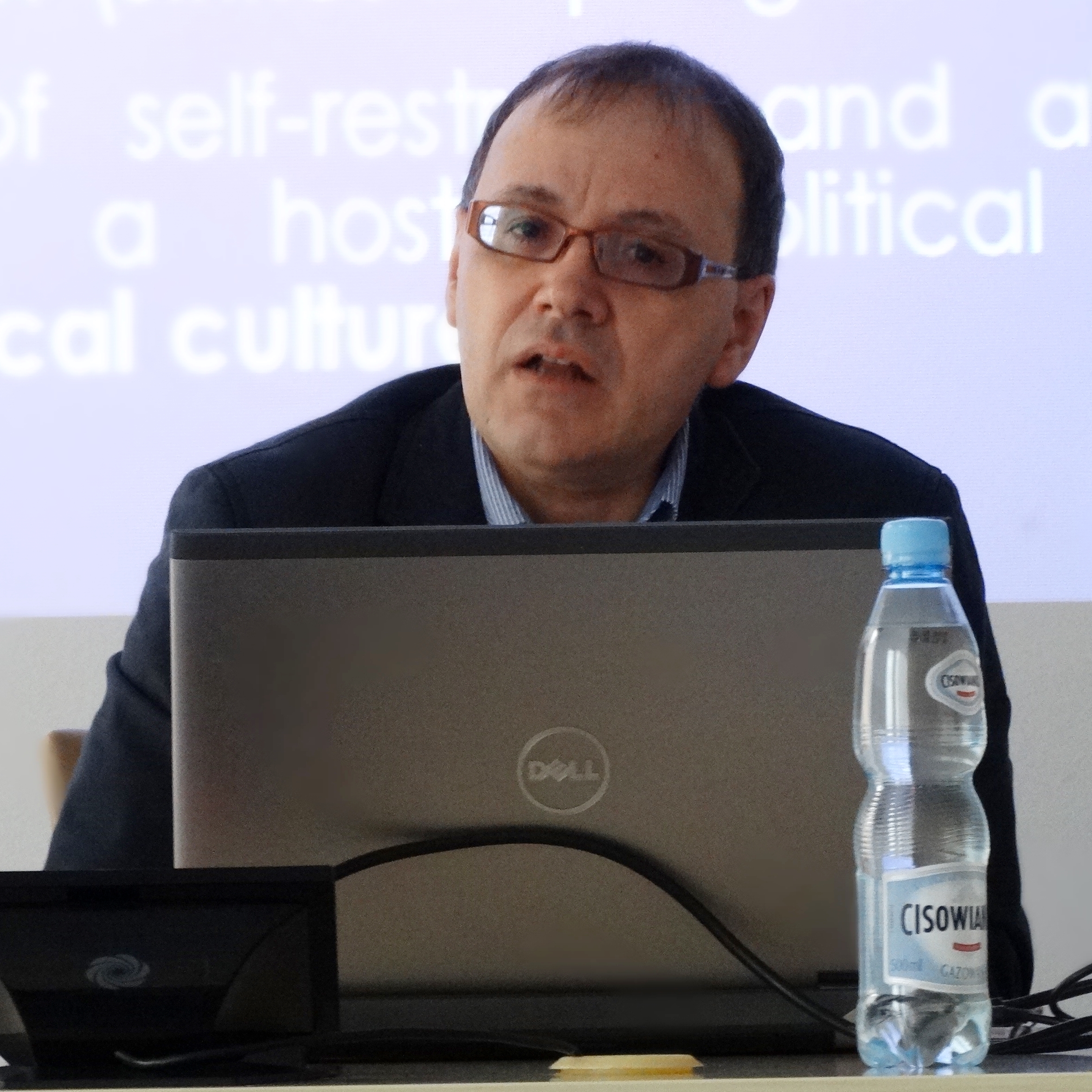 Dragoş Petrescu (b. 21 May 1963) is currently Professor of Comparative Politics at the Faculty of Political Science of the University of Bucharest. He teaches courses relating to comparative politics, security studies, post-1917 European political and social history, and comparative analysis of communist and post-communist regimes. He graduated from the Faculty of Energetics, Polytechnic Institute of Bucharest (1987) and from the Faculty of History, University of Bucharest (1997). He has an MA in Comparative History (1998) from the Central European University (CEU) in Budapest, Hungary, and a PhD in Comparative History (2003) from the same university. During the academic year 2002/2003 he was a Teacher Fellow in Romanian Studies at the School of Slavonic and East European Studies (SSEES), University College London (UCL). Between July 2003 and March 2006, he was the Director of the Romanian Institute for Recent History (IRIR). From March 2006 to January 2010, he was a member of the Collegium of the National Council for the Study of the Securitate Archives (CNSAS) in Bucharest, and between January 2010 and March 2018 he was the President of the same Collegium. In his capacity as President of the CNSAS College, he initiated two important institutional projects: the establishment of the Constantin Ticu Dumitrescu Oral History Centre and the publication of digital resources for research freely accessible on the official website, of which the most significant are “Normative acts concerning the functioning of the Ministry of Internal Affairs, 1948–1989” and ”Sources for the history of the PCdR/PMR/PCR.” He was also a member of the Presidential Commission for the Analysis of the Communist Dictatorship in Romania – CPADCR (2006). His areas of expertise and research interests include: memory of the communist regimes in East-Central Europe; transitional justice in post-1989 Europe; and ethnic conflict and international terrorism. He has authored numerous articles on the communist regime in Romania, the 1989 regime changes in ECE, and transitional justice and the institutionalisation of memory in post-communist Europe, published in specialised international journals and collective volumes. He is the author of Explaining the Romanian Revolution of 1989: Culture, Structure, and Contingency (Bucharest: Editura Enciclopedică, 2010) and Entangled Revolutions: The Breakdown of the Communist regimes in East-Central Europe (Bucharest: Editura Enciclopedică, 2014), and co-editor of Nation-Building and Contested Identities: Romanian & Hungarian Case Studies (Budapest: Regio Books, 2001).

Dragoş Petrescu’s profound interest in history and the communist past is directly linked to his personal experiences in late communist Romania. As for his attitude towards the regime, he remembers: “I was born in a family which suffered under communism. Both my grandfathers were political prisoners, but until 1989 nobody actually talked about this in our family. Of course, I went through the process of indoctrination in grammar school, and I was very sad when I was not chosen to join the ranks of the Pioneer Organisation with the first group of pupils in my class, but only with the second one after some time. Then I became a member of the Communist Youth Union, but only because everybody was automatically included in the organisation once they reached the right age – you were just given the membership card. However, I must say that I refused to join the ranks of the Romanian Communist Party: that was a decision I made consciously and it was my very modest gesture of defiance to the regime. Looking back, I must add that the terrible earthquake of 4 March 1977 was also a watershed regarding my perception of the communist regime in Romania. It just happened that I had been left alone at home by my parents – we lived in the town of Piteşti – and I was listening to Radio Free Europe waiting for the musical program when the earthquake happened. The terrible experience of the earthquake remained forever linked in my mind with the critical stances of the Romanian desk of RFE towards the Ceauşescu regime. One should also note that for a period after the earthquake, some two or three weeks I believe, listening to RFE was somehow tolerated, you could feel that people did not hide anymore the fact that they were listening to that radio station. Nowadays, we would say that it was a period of political socialisation in which many from my generation developed anti-regime attitudes.”

Regarding his particular interest for the communist past, he states: “My experiences throughout the 1980s, as a student at the Faculty of Energetics of the Polytechnic Institute in Bucharest (1982–1987) and subsequently as a young engineer at the Romlux Târgovişte Electric Bulb Factory (1987–1990) definitely influenced my decision to study the communist past after the 1989 regime change. I was a student during the most difficult period of the Ceaușescu regime. Apart from the economic crisis and the widespread malaise, the personality cult of Ceauşescu was really annoying. As an engineer, I faced the sad realities of Romanian communism, that is, the actual economic situation of the country as well as the situation of industrial workers. Finally, I witnessed the bloody revolution of 1989 in the town of Târgovişte, where the Ceausescu couple was executed. Looking back, I think that two recurrent questions, “Why was there so little opposition to Ceauşescu in the 1980s?” and “Why did only Romania witness a bloody revolution in 1989?” contributed heavily to my decision to enrol at the Faculty of History, University of Bucharest. I passed the admission exam in 1992, and my life changed forever.”