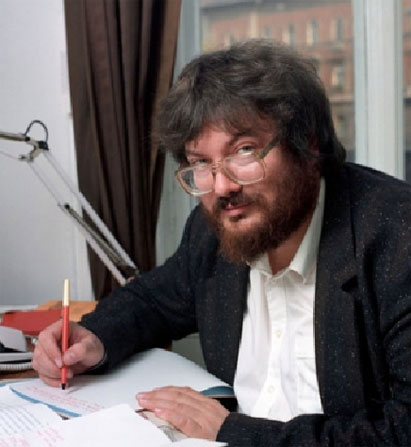 István Géza Szőcs (b. Târgu Mureș, 21 August 1953) Transylvanian Hungarian poet distinguished with the Kossuth and József Attila Awards, also a politician. His father, István Szőcs, was a journalist and critic, his mother (neé Márton) Ráchel, a literary translator. He graduated from the Hungarian–Russian department of Babeș-Bolyai University of Cluj-Napoca in 1978. Between 1974 and 1977 he was the editor of the trilingual student magazine Echinox and, in parallel to this, he was also an active member of the Gaál Gábor Circle which engaged in literary creation and debate. In the period 1977–1982 he was employed by the daily newspaper Igazság, as the editor of the paper’s youth supplement Fellegvár. In the school year of 1982–1983 he worked, for a short time, as a substitute teacher at high-school no. 3 in Cluj-Napoca. His first volume of poems, entitled Te mentél át a vízen? (Was it you who crossed the water?)and published in 1975, instantly earned him a place at the forefront of his generation and of Hungarian poetry in Romania. In his poems he touched upon the major issues of the Hungarian minority with ever increasing clarity, and his subsequent volumes brought him fame in universal Hungarian literature as well. In the academic year of 1979–1980, at the proposal of the writer András Sütő he studied at the University of Vienna as a Herder scholarship student. In 1981 he won a scholarship to West Berlin and he seized the opportunity to travel to the Netherlands, Belgium, Canada, and the United States (ACNSAS, I160234/3, 236–237v; I160234/4, 50fv; I160234/5, 385–388; I160234/6, 211–244).

Due to the ever-increasing censorship applied to official publications, he joined Romanian efforts to create the “second public sphere.” In 1982 he joined forces with Attila Ara-Kovács, Antal Károly Tóth, and Ilona Tóth as editors of the samizdat publication known as Ellenpontok (Counterpoints) (Tóth and Tóth 2017; Tóth 1994). After the case of the samizdat had been closed, Szőcs remained in Romania, since he felt that he was needed in this country. For quite a long while he was unemployed and faced existential difficulties. He continued his dissident activity. In July of 1984 he drew-up a minority international project, then, on 5 November, he submitted the memorandum dated 14 July to the Central Committee of the Romanian Communist Party. In the following months Szőcs completed the unanswered submission and, in possession of the supporting signatures of the writer Dorin Tudoran (Bucharest) and the economist Károly Király (Târgu Mureș), re-submitted it in April 1985 to the same committee. Subsequently, the material also reached Radio Free Europe and it became the topic of articles in the Western press (ACNSAS, I160234/4, 124–137, 372–373v; ACNSAS, I160234/5, 71–79).

The Securitate followed Géza Szőcs’s further destiny as part of the operational plan bearing the cover name of “Oponenții-83.” They subjected him to regular interrogations and made him write declarations. Among the priorities of the Cluj-Napoca Securitate, coordinated in this case from Bucharest, were to totally compromise the target person monitored under the cover-name “Sabău,” to discredit him morally by sending forged letters in his name abroad, in which he allegedly declared the problem of nationalities in Romania to be solved, and to discourage and isolate him both in and outside Romania. On 26 June 1985 the secret police searched the house of his parents and then on 1 October it conducted a search at his home as well. From time to time, the publication of his works was approved in order to compromise him. His employment as a researcher at the Cluj-Napoca Institute of Literary History and Linguistics as of May 1985 divided the Hungarian intellectual elite in this city (ACNSAS, I160234/3, 78, 84). Apart from his continuous street shadowing, his correspondence was intercepted and his foreign telephone conversations were listened to and always interrupted. Moreover, his telephone number was regularly changed without his knowing, in order to render him unavailable (ACNSAS, I160234/4, 13fv). His letter of 2 December 1985 sent to Ara-Kovács in Budapest conveys his state of isolation and daily humiliation – at the same time denying allegations of his agent activity: “I have become aware of the fact that whatever I say makes me a scoundrel, and my silence makes me a scoundrel, too.” (ACNSAS, I160234/1,106).

Géza Szőcs reached the conclusion that although it was possible to live (and one should live) in Romania, carrying out an intellectual activity had become impossible, so eventually opting for emigration, he left the country on August 31 1986. He first emigrated to the Federal Republic of Germany, then to Switzerland. Between 1986 and 1989 he worked as a journalist in Geneva, and later, between 1989 and 1990 he held the position of head of Radio Free Europe’s Budapest office. From 1989 he was employed by the journal Magyar Napló. In 1986 Géza Szőcs published his volumes A Szélnek eresztett bábu (The puppet thrown to the winds)and Az uniformis látogatása (The visit of the uniform) in Budapest and in the United States respectively. In 1988 his prose work Kitömött utcák, hegedűk (Stuffed streets, violins) was published in Cologne, and in 1989 his volume of poems A sirálybőr cipő (The seagull-skin shoe) came off the press (Szőcs's blog page).

Up to the change of regime, the Securitate closely monitored his professional and public activity, especially his interviews and speeches relating to Romania in various forums and radio broadcasts. The secret police was aware of his excellent contacts with Western Hungarian immigrants and knew that on 5 May 1987 he was interviewed by the US Senate’s Foreign Affairs Committee about the Hungarian minority in Transylvania, Romania. He gave several interviews to Radio Free Europe and it was he who, on 16 June 1989 broadcast live the reburial ceremony of Imre Nagy in Budapest. His correspondence and phone calls to relatives based in Romania were intercepted, as were his messages delivered through intermediaries, and the packages he sent were checked, as documents in the Securitate archives illustrate. The secret police tried to learn his intentions, and to control and “positively influence” him through agent provocateurs, and, in parallel to this, as it was intended to keep up the appearance of his being a Securitate agent, measures were taken to compromise him, with the help of the informant network and Department “D” of Bucharest in charge of disinformation. As a “precautionary” measure, they subjected his family members and friends to close supervision and, on occasions issued warnings to these people and to foreign citizens visiting the country who they suspected might have carried out courier missions on his behalf (ACNSAS, I160234/1, 16–25; I160234/13, 20–25).

In 1990, following the change of regime in Romania, he resettled in Cluj-Napoca where, beside his work as a journalist-editor he also took on political roles. Between 1990 and 1991 he was the chief secretary of the Democratic Alliance of Hungarians in Romania (DAHR) and from 1991 until 1993 he held the position of vice president of the party. In 1990 he entered the Romanian Parliament in Bucharest as a senator and DAHR fraction leader (whip). At the party’s Brașov congress in January 1993 he renounced his positions and in 1999 he left the organisation. In the following period he became engaged in publishing. In 1992 he founded the publishing house known as Erdélyi Híradó (Transylvanian News Report), which, inter alia, published the political magazine called Orient Expressz. In 1993, Szőcs who paid frequent visits to Hungary, became the publisher and editor-in-chief of the magazine A Dunánál, and member of the board of editors of Magyar Szemle. In the period between 1996 and 1998 he functioned as a presidency member of the Union of Hungarian Civil Cooperation. Between 1996 and 2000 he was a member of the supervisory board of the Hungária Televízió Public Foundation (which supervises the TV channel Duna TV/Danube). Between 2008 and 2010 he was a presidency member of the Board of Trustees appointed by FIDESZ. As of 2007 he has been the senior staff member of the magazine Irodalmi Jelen. He continued his activity as a practicing politician in Hungary. In the time interval between 2010 and 2012 he was secretary of state for culture in the Ministry of National Resources of the second Viktor Orbán government. As of 2011 he has been the chairman of the Hungarian PEN Club (Szőcs Géza életrajza 2012). Since 2012 he has been the Hungarian prime minister’s chief cultural advisor. Over time, he has received numerous recognitions and awards. In 1986 he received the Graves Award, and in 1993 he was distinguished with the József Attila Award. In the year 1993 Szőcs received the Bethlen Gábor Award, then in 2006 the Hungarian Arts Award. In 2009 he was awarded with the Grand Prize of the European Academy Vienna, in 2013 he was distinguished with the Laureate of the Hungarian Republic award and in 2015 with the Kossuth Prize.