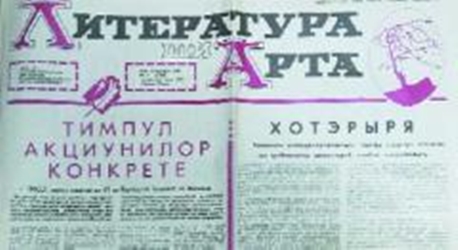 Coming from Chişinău, the magazine Literatura şi arta was the most obvious presence in the Marian Zulean private collection. As it came out weekly, there came to be over 200 issues in the collection.

Literatura şi arta came through the intermediary of the Romanian Post Office, because it was included in the catalogue of publications to which one could officially subscribe. The magazine was founded in 1977, and initially it was the official publication of the Writers’ Union of the Moldavian Soviet Socialist Republic, nowadays the Writers’ Union of the Republic of Moldova. This magazine played an important role in the late 1980s, during the so-called period of national rebirth in Moldova.

Marian Zulean recalls: “I remember that at the beginning of my subscription to this magazine, it came printed in Cyrillic letters. There were Romanian words and sentences, but written in Cyrillic script. Later, starting with 1988, I think [in reality, starting on 15 June 1989, the centenary of the death of the poet Mihai Eminescu, celebrated as the national poet in Romania, then still the Socialist Republic of Romania], it was printed in Roman script. I think this happened in the period in which the running of the magazine was taken over by Nicolae Dabija.” Indeed, in the period 1988–1989, when the magazine was headed by Nicolae Dabija, Literatura şi arta was one of the most important publications in the Republic of Moldova and the principal promoter of the return to writing in Roman script and the designation of Romanian as the official language in the territory.

“The magazine came to this country too. And it was, for those times, very lively, written in an alert language, very different from that of cultural publications here. Even if it was written in Cyrillic. Also, in its pages there were materials with political content – approved by a Moscow that, at that time, was much more liberal and more open than what our communists were doing here. It was an unusually free cultural publication for those times,” recalls Marian Zulean.

In its heyday, the magazine had a total print-run of approximately 260,000 copies per issue. Several thousand arrived in Romania, not in newspaper kiosks, however, but only by subscription, through the intermediary of the Romanian Post Office. It continued to appear after 1989 too, and, in a different format and with a much reduced impact, it is still active nowadays in the Republic of Moldova.

As it was merely printed on newsprint, this magazine was also very perishable. Nowadays only a few copies are still to be found in the Marian Zulean collection. In contrast to collections containing unique materials, where any loss is irrecoverable, the disappearance of the magazine Literatura şi arta from the Marian Zulean collection is not a tragedy for a potential researcher, as the issues in question can be found in public libraries in Romania and Moldova. The reason for its inclusion among the remarkable items in this collection is the astounding discrepancy between the discourse promoted by this literary magazine in the late 1980s and the characteristic discourse of cultural publications in Romania in the same period. The fact that under Gorbachev freedom of expression in the Moldavian SSR, as in the rest of the USSR, was appreciably greater than on the Romanian side of the River Prut produced a significant change among Romanians, who were in general anti-Soviet, but now, for the first time in the post-war period, came to direct their hopes for change towards Moscow (C. Petrescu 2013, 244–56). Furthermore, another discrepancy between the two cultural environments is worthy of notice. In Moldova, the national poet Mihai Eminescu was not only the symbol of this magazine, but also of the struggle for the recognition of the Romanian language, and implicitly of contestation of the Soviet communist regime. In Romania, the same poet had come to be dogmatised as a mere annex to the official communist-nationalist discourse, which was only deconstructed in the post-communist period (Bădescu 1999).