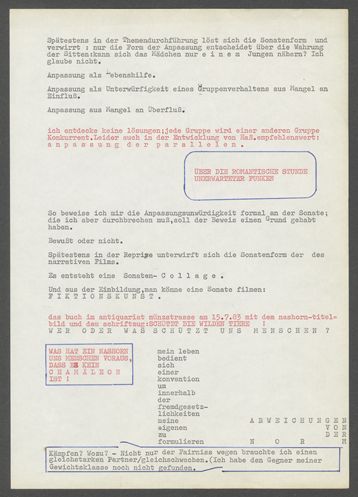 Gino Hahnemann was one of the most prolific Super-8 filmmakers within the alternative film milieu of the GDR. According to the historian Claus Löser, without Hahnemann‘s influence, the independent film scene in the GDR would have developed much differently. Löser has preserved many of Hahnemann’s films in his “Ex.Oriente.Lux“ archive.


The Gino-Hahnemann Archive at the Academy of Arts also contains several films. They document simple events and occurrences, but were meticulously prepared and often reflect deep cultural-historical examinations of Kafka, Hölderlin or Michelangelo.

As a dramatist and director, Hahnemann created exposés with shooting schedules, gave recommendations regarding camera settings and documented these with still motions, even noting the materials used as well as their costs. The Hahnemann archive at the Academy of Arts contains thirteen such film documentations (spanning 1981-1986). They underline the laborious production of alternative, non-state sanctioned art in the GDR.