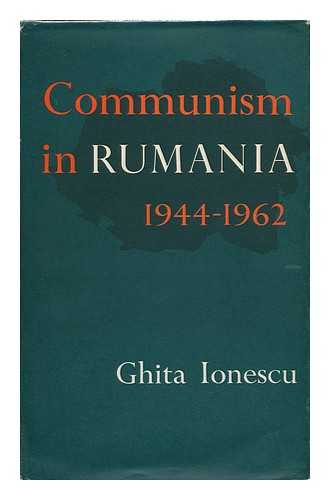 Since the 1960s, Communism in Romania, 1944–1962 has been the classic monograph on the first two decades of postwar Romania, setting the frame for subsequent research on the topic not only in Western academia, but also in post-1989 Romanian historiography. The book was written between 1960 and 1963 (before the relative liberalisation of the late 1960s that allowed Western scholars to conduct field research in Romania). The author therefore had limited access to Romanian sources such as the official press and official statistics, and relied rather on memoirs and various publications of Romanian exiles in the West. However, many of his conclusions are still valid. His life experiences in both interwar Romania and Western exile provided him with deep insights into the key events of the period he was researching. Before 1945, he was well acquainted with some communist Romanian intellectuals, such as Lucreţiu Pătrăşcanu, one of Gheorghiu-Dej’s competitors for the leadership of the Party during the period from 1945 to 1948. As a person involved in the political organisations of the Romanian exile, Ionescu had the opportunity to meet people that had held key positions in the period of the communist takeover in Romania (1944–1947) and had managed to escape to the West. He benefitted also from his experience as head of the Romanian service of Radio Free Europe where he had the occasion to access valuable information and to acquire a broader comparative perspective on the communist regime in Romania in its East European context.

As with most Western contributions on the Eastern Bloc of the 1950s and 1960s, the conceptual framework of the book is provided by the theory of totalitarianism. He also approached the communist regime in Romania from a comparative perspective and tried to understand its evolution by paying special attention to Moscow’s strategies in the Eastern Bloc. The book is made up of three parts focusing on three distinct periods of postwar Romania, an introduction dealing with the history of the Communist Party of Romania during the interwar and war period, and conclusions. As the author explains in the preface, the book was structured chronologically because he considered that the turning points in the inner politics of postwar Romania were the results of Cold War shifts and Eastern Bloc disturbances (Ionescu 1964, xvi). Thus, the first part analyses the stages of the Communist takeover in Romania from the instalment of the Groza government in March 1945 to the forced abdication of King Michael in December 1947. The second part deals with key aspects of the sovietisation of Romania, such as the creation of the one-party system, the internal Party purges, the collectivisation of agriculture and the launch of intense industrialisation. The third part of the book covers the period 1956–1962, giving special attention to the effects of de-Stalinisation and the Hungarian Revolution in Romania and to the collectivisation and industrialisation drive of the period 1958–1962 and its impact on Soviet-Romanian political relations.

Communism in Romania, 1944–1962 is not only a comprehensive monograph on a period marked by radical political and social transformations, but also offers original insights into the turning moment of the late 1950s and early 1960s. Ionescu analyses how Gheorghiu-Dej skilfully eluded the de-Stalinisation wave in the mid-1950s and consolidated his position in the Party. He rightly observes the origins of the Romanian split with Moscow in the economic disputes over the greater economic integration of the Eastern Bloc countries into COMECON and predicted in Nicolae Ceauşescu the future winner of the internal competition to succeed Gheorghiu-Dej at the Party’s head.