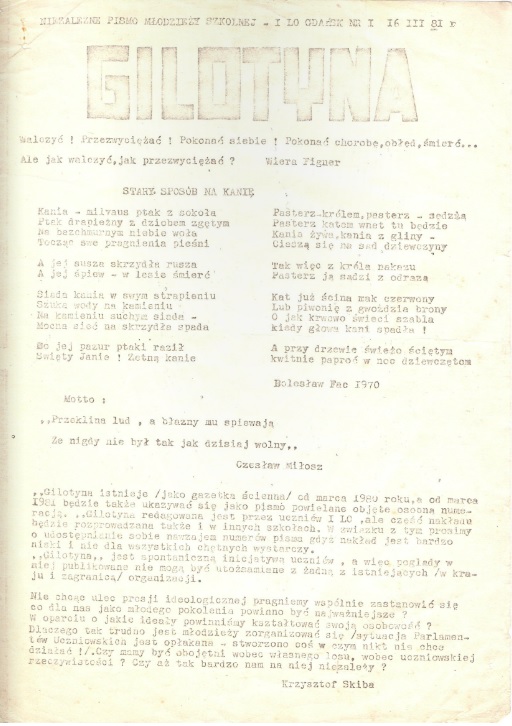 “Gilotyna” was one of the first independent youth magazines in Polish People’s Republic. Initially, since 1980, it functioned as a satiric wall newspaper, edited by pupils from the 1st High School in Gdansk. After a year, it started to be published as a newspaper - independently copied and disseminated. It was edited by Janusz Waluszko, Krzysztof Skiba, Wojciech Lipka, Michał Skakuj i Maciej Kosycarz. In 1983 Waluszko and Skiba became one of the co-founders of the Alternative Society Movement – the first post-war anarchist organisation in Poland, and the most important magazine in this environment was “Homek” (the title is a diminutive of the Latin homo – it was supposed to emphasize their perspective of a single man standing against the big history and politics). The preceding “Gilotyna” did not have a visibly anarchistic character, however it included a lot of radically political content. It was an independent, bottom-up, youth initiative of the pupils who sympathized with the democratic opposition, yet did not identified with any particular group.
Poznan Anarchist Library in Rozbrat owns both the first issues of “Gilotyna” and “Homek”, as well as many other underground magazines on politics and culture.