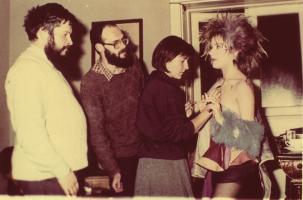 Juris Boiko (1954-2002) was born in Kuibishev (now Samara) in Russia, into the family of politically repressed people. His father was Ukrainian and his mother was Latvian. The Boiko family moved to Latvia in 1958. He attracted the attention of the KGB due to the samizdat magazines he created together with Hardijs Lediņš, and was barred from higher education. However, he received a certificate as an ‘artist-decorator’ from the People's University. After his military service, he worked for a brief time as a librarian at the Latvian SSR State library, and until the end of the 1980s he worked as an artist-decorator at the Botanic Garden of the Latvian Academy of Sciences in Salaspils. Boiko collaborated with Hardijs Lediņš in experimental music and NSRD projects until 1989. Afterwards, he worked independently, making video installations, acting as an art curator, and working as a graphic designer. He also translated from German and English, and wrote poetry.