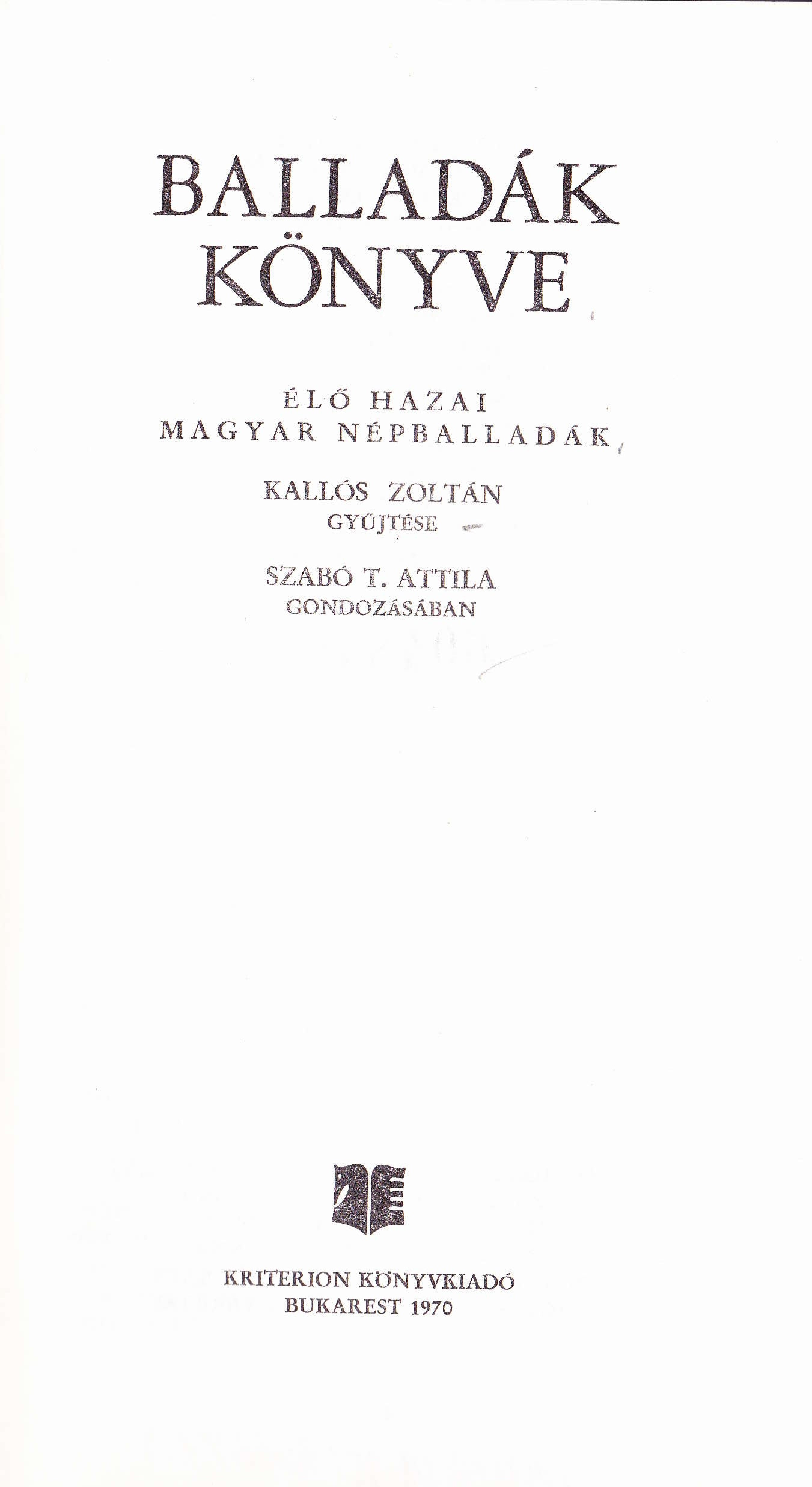 The Balladákkönyve (Book of ballads) by Zoltán Kallós and Attila Szabó T. contains 259 ballads, of which 162 have musical notes included. Whereas the collection of Hungarian popular ballads had a rather significant history, and earlier volumes of other researchers include also ballads that had already been published before, in contrast to these, all the ballads featured in Kallós’s volume were printed for the first time. The published versions are, for the most part, unknown pieces; moreover, the ballads and ballad-like pieces accompanied by musical notes, by which he enriched the repertoire of ballads in print, outnumber the totality of ballads published by his predecessors.

The collection of Hungarian folk ballads began when the historian and Franciscan Friar Nicephor Elek Gergő (1805–1844) visited Moldavia in 1836, on a mission entrusted to him by the Hungarian Academy of Sciences (MTA) with a view to inquiring about the possibilities of research into the Csángós, preservers of an old Hungarian dialect (D. Mátai 1976). Upon his return he gave an account of his experiences to Gábor Döbrentei (1786–1851), a regular member of the MTA (Szinnyei 1893). It was thanks to his encouragement that in 1841 Conventual Franciscan Friar János Ince Petrás (1813–1886), parish priest of the Moldavian village Cleja, noted down about eighty-eight Csángó folk songs collected from his congregation members, among them eight ballads (Domokos 1987). However, it was not until 1956 that the contents of his manuscript sent to the Academy in 1841 became known to the public (Kallós 2014). He was followed by ethnographer JánosKriza (1811–1875), a Unitarian bishop who collected the material comprised under the title Vadrózsák (Wild Roses) around the year 1848; however, a volume containing this material was not published until1863 (Kriza 1987). Its full material, the most comprehensive until the publication of Zoltán Kallós’s collections, was published only posthumously in 1882, in the third volume of Népköltési Gyűjtemény (Folklore Collection) (Kriza et al. 1882).

Until the twentieth century, only the texts of Hungarian folk ballads were recorded in writing and published; as of the early years of the twentieth century the musical notes were written down as well. Later, more and more people began to make audio recordings, too, using the phonograph cylinder, the phonograph record, and then the tape recorder. JánosSeprődi (1874–1923, music historian, folklorist), Béla Bartók (1881–1945, composer), Zoltán Kodály, Péter Pál Domokos (1901–1992, historian, ethnographer), József Faragó (1922–2004, ethnographer), and János Jagamas published a total of approximately 160 ballads, with both texts and tunes included.

Compared to the results yielded by previous efforts Kallós’sBook of Ballads extended the geographical area of the collection, as the vast majority of ballads published so far came from the Székely region. In 1942, at the start of his collecting work, the young Kallós could hardly have been familiar with the rather restricted geographical area of domestic ballad collection. However, by a lucky choice, he commenced his work primarily in one of the least known regions, in the northern part of the Transylvanian Plain. He began collecting ballads in his place of education, in Răscruci (Válaszút), then continued in the nearby Gădălin, Suatu, Vaida Cămăraș, Vița, and Vișea, and in the somewhat farther-off Buza, Tonciu, Strugureni, Fizeșu Gherlii, and Sânmărtin. Soon Kallós directed his attention beyond the boundaries of his immediate childhood environment and continued his work in three other regions. By doing this he added almost entirely unknown regions to the area of research into Hungarian ballads in Romania. Thanks to Kallós’s efforts the already known Moldavian Csángó ballad collection sites were complemented with new areas (Berdilă, Gârleni, Lărguța, Faraoani) that were not represented in any ballad collections published so far by folklorists.

Even more significant than the extended geographical borders of the collection site is the diversity of published ballads. Beside the number of ballads included in the first edition, the considerable length of these versions can also be observed. Never before had there been a publication of Hungarian ballads – either in Romania or in Hungary – that featured so many and such long ballads and ballad-like pieces and contributed so greatly to the general knowledge of Hungarian ballads. In the case of numerous ballad versions in the old style one frequently comes across pieces of extraordinary length, quite often comprising as many as forty to eighty stanzas.

The word ballad is an invention of the history of literature;both the word itself and the concept were unknown to Hungarian people. The fact that it is known today is due to publications and textbooks. Initially the word ballad was derived from the Italian ballare, meaning to dance. The genre was born and flourished in France in the fourteenth century and spread all over Europe. Ballads convey an ancient system of values which was preserved by the peasantry until the twentieth century, although to an ever decreasing extent. These ballads tell about the fundamental equality of all people and of their equal right to use the gifts of nature. The peasantry lives according to tradition, the rules and morals of which have not been recorded in writing. Man commits the greatest sins in the name of love and against love: ballads tell about the ways and means of committing these sins. They do not dwell on specific aspects of the law, but tell about the violations of rules and the subsequent punishments.

Who sings and when, why, to whom does a person sing a certain ballad? In folk customs there are roles that on various commemorations and festive situations help the participants; thus spectators are also actors who learn the roles so that when the occasion comes they can react in a proper manner. This is how the little girl in the audience one day becomes a bridesmaid, then a bride, godmother, cook, and eventually a bride’s/bridegroom’s mother. Folk art is not familiar with the display window, the picture decorating the room, the ornament, the stage or the performance, nor does it know a separation of audience and actors. We know from Kallós’s works that the ballad as a genre addresses in fact the sorrowful-persons who are drawn to this genre suffering from the lack of love or punished as a result of having committed a crime against love. The ballad narrates this, though it does not tell of reality but of its artistically recreated version, in a traditional and impersonal form. Ballads are addressed to people who are familiar with their contents and on whose understanding the singer can rely. The sin has been committed: its consequences are beyond repair. There is one possibility to bring solace, though: putting things into fine words, formulating the occurrences beautifully, to serve as a warning (Kallós 2014).

Attila T. Szabó, the author of the preface to the Book of Ballads, defined this work as a two-faced piece of art, with one face turned to the general public and the other facing the experts in ballad research. It was primarily the specialised field of scholarship that saw a significant and permanent contribution in the valuable source material published in this book. Professionally speaking, its publication was a shock in the positive sense. It paved the way for new possibilities, it yielded new results, and at the same time it pointed beyond itself, demanding continuous research. Furthermore, the author emphasised the fact that submitting a truly valuable material for purposes of specialised scholarly research is hardly possible without the inclusion of musical notation.