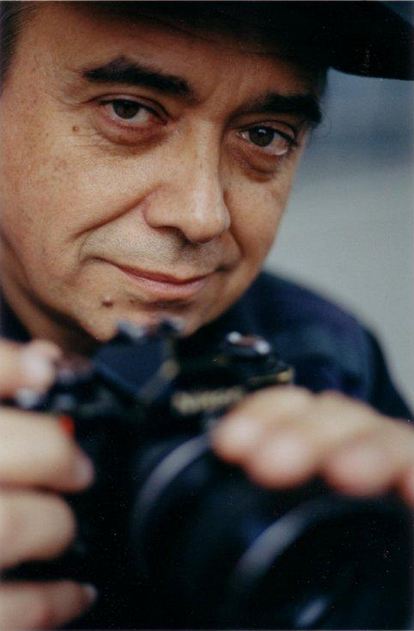 Tamás Urbán, a well-known forensics and social documentary photographer is also an important chronicler of the Hungarian pop culture of the Kádár era. He was born in Satu Mare, a city on the Roman-Hungarian border, to a Calvinist officer-family, but his family later moved to Debrecen, Hungary. As Urbán recalled in 2008, his family had had confrontations with the government before. His grandfather had been a high-ranking customs official, but he had been dismissed during the Rákosi era because he had gone to a church to see a concert in his officer’s uniform. Much later, during the debates concerning the construction of the Gabčíkovo–Nagymaros dams, his father, an agricultural engineer who had been working for the Ministry of Agriculture since the 1960s, took a strong position against the environmentally destructive project.

Urbán moved to Budapest in 1964. He studied to be an audio engineer at the faculty of electrical engineering of the Budapest University of Technology, but he dropped out and started to focus on photography instead. His first photographs were published during his high school years in the Hajdú-bihari Napló (Hajdú-Bihar Journal). Around this time, he met István Kotroczó, a photo reporter for the magazine Magyar Ifjúság (Hungarian Youth). This encounter shaped his career. Urbán gave up his dream of working in television and choose photography instead. He learned the profession from Kotroczó, who became his mentor. For the most part, Kotroczó was photographing young women, celebrities, models, or simple passers-by: these were pictures for magazines. Urbán pursued this lucrative work too, especially when Ifjúsági Magazin (Youth Magazine) started to publish his photos in the 1970s. In 2015, he offered the following recollection: “They did not give much instruction about what pictures they wanted, but we were usually expected to feature a hot chick. I was doing piecework, and as they published a lot of my pictures. I was quite well-paid. So I bought the first television for the family.”

His first official position was at Pest Megyei Hírlap (Pest County Gazette), and in 1972 he began working at Ifjúsági Magazin (IM), where he remained for twenty years. IM was founded in 1965 to offer guidance to young readers on how to live a “modernly moral” life. But as Urbán sees it, these hopes were never fully realized: “In one of the first issues they published something about the Beatles, and this caused great indignation in the more conservative circles of the party.” The founding editors were quickly removed and the content of the issues was closely monitored by the central committee of the Hungarian Young Communist League (KISZ). From time to time, the censors prevented things from being published, but at the time, Urbán and the others knew nothing about the confrontations between the editorial staff and the KISZ leadership. Meanwhile, the magazine became increasingly popular, and the print runs ran as high as 350,000 copies.

Urbán started to photograph bands and concerts in the 1960s. He took pictures in various clubs, at outdoor pop music concerts, and sometimes even during tours outside the country. Urbán also documented the regular assaults against fans by the police, and fortunately, he did not suffer any consequences for having done this. As he sees it, this was because of his discrete style, especially when he did reports. He consciously avoided splurge, and he only took the most necessary equipment. “Quietly, melting into the mass – this was my philosophy,” he said in 2015.

This is how he worked when he photographed his most important compositions in the 1980s: he photographed people who were on the periphery of society and he took pictures in prisons using only one camera, a single lens, and no flash. He sought to be accepted by the people in the communities which he photographed. For example, he gained the trust of the “junkies” by trying drugs with them. However, these photo reports could not gain exposure in the public eye.

At IM, Urbán could also make his own topic proposals. A memorable project for him involved the Reformatory School in Aszód in 1973. The photo series documents the hard life of the residents of the school. In 1972–73, he was taking classes at the school of the National Association of Hungarian Journalists, where he studied under Éva Keleti and Tamás Féner. They encouraged him to take on deeper topics. Photographing the reformatory school was his exam project. An exhibition was held at the school for a private audience, but the pictures had to remain in the institution: the party would not allow them to be seen by the larger public. In a 2008 interview, Urbán remembers that “Éva Keleti and the others did not accept this, and they went as far as György Aczél to get permission to exhibit the photos. Aczél asked the Ministry, they said no.” Urbán worked for months on the report, and he had to wait five years to display it in the Studio of Young Photographers in 1978, and even then, he did so without official permission. Articles could not be published on such sensitive topics. KISZ and the MSZMP Agitprop would not permit this.

Nevertheless, Urbán was still one of the most successful photographers of the Kádár era. He also took advertisement photos. For example, he was the official photographer for the department store Skála in Buda: among many other projects, he contributed to the advertising campaign of the fashion brand S-modell. He also founded the first private photo studio in Hungary, where numerous well-known photographers of the 1980s worked. However, he was never interested in experimental photography. In the middle of the 1970s, realistic and experimental photographers were rather divided. As Urbán sees it, the foundation of the Studio of Young Photographers in 1977, where Tamás Féner and István Katona were active, was the first step towards resolving this disagreement. In 1985, he was given the Balázs Béla Award for his work by the Association of Hungarian Journalists.

The etalon for Urbán was the German periodical Stern. He began collecting issues of Stern in the 1970s. In 1989, as Western Europe began to pay more attention to Eastern Europe, he was commissioned by Stern to document the Romanian revolution. This assignment turned into a more serious working relationship. After IM underwent a change of profile and sociographic topics were no longer published in its issues, Urbán quit and moved to Hamburg to photograph for Stern. He was in an especially good position to take pictures in the former German Democratic Republic, since at the beginning of the 1990s people had some mistrust for better positioned Western German photographers. This was not a problem with a Hungarian, who also came from the periphery. This is how the photo series about East German sex workers – Sexwelle in der DDR – could be made. The project Mein Trabant was based on one of Urbán’s ideas, which touched on the sentiment of “Ostalgie”: they put out an advertisement looking for special, DIY crafted Trabants and Urbán went to photograph them. Urbán came back to Hungary in 1993, when the press was focusing on Yugoslavia and interest in Hungary had dropped. Back at home, Urbán was working for the tabloid Blikk as a forensic reporter, and in 2002, he began to work with the Police Museum.

Urbán was always aware of the importance of archiving, and throughout his career he very consciously archived his own work. Therefore, working at a museum was not an entirely alien terrain for him. He has kept negatives of almost every photograph he has ever taken. Even in the case of photographs he sold, he tried to retain or get back the negatives. A significant portion of the Police Museum’s holdings was saved by Urbán. At the beginning of the 1990s he saved a number of boxes full of films and photographs, which were going to be thrown away. These 65,000 pictures are the core of the photo collection of the Police Museum. At the moment, the digitalized versions are available in the online collection of OSA under the name “Hungarian Police Photo Archive.”

Nowadays, Urbán is preoccupied with digitalizing and documenting his archive, which consists of roughly one million negatives. Since 2015, thousands of his photographs (a representative portion of his work) have been available at Fortepan. Urbán’s photographs offer honest, faithful, and intimate documentation of many aspects of the socialist era and the almost two decades which have passed since, including, for instance, the saved Csontváry painting collection, the various subcultures, and the casualty wards and prisons. Many of these series deal with topics which were entirely or partially taboo at the time.