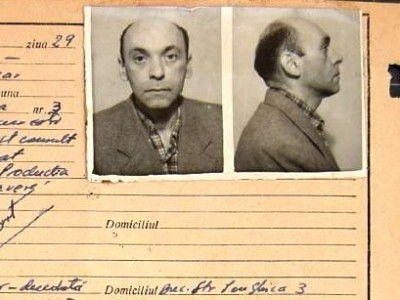 This twelve-page typewritten document, which the author endorsed with his signature, represents a condensed version of his memoirs. After his release from prison in 1964, Steinhardt wrote several versions of his memoirs, out of which some were confiscated by the secret police, while others reached Radio Free Europe and were broadcast in the late 1980s. Steinhardt very much valued this manuscript, which he considered his literary testament, so he dedicated considerable effort to its preservation with a view to future publication. One version of the memoirs, which the author entrusted to a friend before his death in 1989, was published immediately after the fall of communism and became a best-selling book. There is another published version of the memoirs, which was discovered more than two decades later, hidden in the monastery of Rohia, where Steinhardt became a monk in 1980. The short version, confiscated by the Securitate and preserved in this collection, focuses even more clearly than the published ones, which number hundreds of pages, on the same identity issue: the author’s conversion to the Orthodox faith, which happened while he was imprisoned. This central event in his life illustrates that Aleksander Wat’s widely-known prison experience was not unique in the Soviet bloc. Steinhardt’s conversion, however, was neither a result of his illumination in adverse conditions nor a part of his strategy of physically and mentally surviving the experience of imprisonment; it was his response to an identity question, which imprisonment did not trigger, but only precipitated. This short version of his memoirs makes this clear by chronologically reiterating his formative years, the intense socialisation with his Romanian friends and the bothersome questions related to his Jewishness, to show ultimately that he realised well before his imprisonment that he was closer to the Romanian intellectuals of his generation than to the Jewish community. As Steinhardt put it, his conversion was a “love story: a double falling in love with both the Christian Church and the Romanian nation.” Particularly interesting also is the author’s perspective on the tragedies of the twentieth century, which affected him directly, i.e., the adversities he had to endure as a Jew under a right-wing military dictatorship and as a Romanian intellectual under the communist regime. Unlike others who experienced such traumas, Steinhardt chose to come to terms with his troubled past not only by forgiving his perpetrators, but also by forgetting about retribution. As he put it in order to justify his option for monasticism, the prison experience had shown him “the world as it is,” and this made him willing to regard it “not with animosity, but from a distance.”