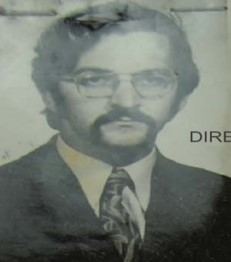 Attila Ara-Kovács (b. Oradea, 14 January 1953), philosopher, politician, journalist, editor. His father was an economist, his mother a commodity expert; he had one sister. He completed his secondary-school studies at the Alexandru Moghioroș School (today Ady Endre Theoretical High School), the legal successor of the Ursuline Order convent school in Oradea. He did not carry out military service,as the military medical committee declared him unfit for service in September 1973 (ACNSAS, I210560/1, 27fv). Between 1973 and 1978, he studied philosophy (distance courses) at the Faculty of History and Philosophy of Babeș-Bolyai University, where he annually submitted an employment certificate in compliance with the distance education requirements. According to Ara-Kovács’s personal record kept by the Securitate, the unemployed young man living with his parents never set foot abroad. Ara-Kovács’s interest in Hungarian literature was already evident during his secondary-school studies and he further nurtured this interest as a student in Cluj-Napoca as well as in the Ady Endre Literary Circle in Oradea. As of 1978, “due to his nationalistic activity and manifestations” in the literary circle, his activity was monitored within the framework of a data collection-observation file. In addition to the reports drawn-up on him by the informant network, from the late 1970s the street shadowing of the target known as “Kos” yielded further documents and pictures. His correspondence was intercepted. This is how in 1981 the state confiscated photocopied material sent from Vienna which included the Hungarian translation of Paul Goma’s “Vingt ans après,” published in Cahiers de L’Est no. 8 (1976) under the title “In the Romanian Prisons.” Already at that time, apart from retributive instructions, the Securitate took measures in order to scare off Ara-Kovács’s acquaintances and to disinform his social circle (ACNSAS, I210560/2, 200; I210560/6, 29–31, 184–186v, 232, 265, 362–363). Their assessment was further complicated by the fact that in 1980 the State Council (Consiliul de Stat), following a positive evaluation by the Bihor County Party Committee, approved his marriage to Katalin Kovács, a Hungarian citizen. The authorities also consented to his emigration. Ara-Kovács renounced his Romanian citizenship. However, the Hungarian authorities did not issue an entrance visa before November 1982, after the Ellenpontok case had been sparked and publicised.

The violations of human rights and ethnic discrimination that intensified as of the second half of the 1970s in Romania, the experience gained as a member of the Ady Endre Literary Circle, together the failed attempt of the Hungarian intellectual elite of Oradea to launch a magazine in 1980, drove him to act. It was at his initiative that the most renowned Transylvanian Hungarian samizdat magazine called Ellenpontok (Counterpoints) was born. Between March and October, 1982, Ara-Kovács as a founder and editor published eight issues (sixty-five texts on 293 typed pages), primarily with the help of Antal Károly Tóth, Ilona Tóth, and Géza Szőcs. The house searches conducted by the Securitate on 7 November 1982 and harassment by the authorities did not stop him from compiling the 24-page ninth issue at the end of that same year (Tóth and Tóth 2017; Tóth 1994). On May 24, 1983 the Securitate instructed the customs authorities in Borș and Episcopia Bihorului to perform a strict check on Ara-Kovács who was supposed to leave the country for good the following day. Two days later, on the order of George Homoștean, minister of the interior, Ara-Kovács was placed on the list of undesirable persons for a period of five years (ACNSAS, I210560/5, 12, 15–16). Up until the change of regime, the Securitate closely monitored his activity in Hungary, especially his TV and radio broadcasts in 1989, as interviews with Ara-Kovács about human rights violations and ethnic discrimination in Romania became more and more frequent. His telephone conversations with family members and his correspondence with friends and acquaintances in Romania were intercepted on a regular basis (ACNSAS, I210560/7, 1–6, 10–15).

After his emigration to Hungary in the summer of 1983, Ara-Kovács founded the Erdélyi Magyar Hírügynökség (Hungarian Press of Transylvania, HPT). Although the first report, issue no. 1983/1 recorded 20 May, a date prior to Ara-Kovacs’s emigration, as the date of foundation, this was presumably just a means to mislead the Securitate, as in the case of Ellenpontok. According to the report, the Romanian authorities made the members of the agency “operate anonymously and apply the utmost precaution regarding their information sources.” According to the programme-setting report, the agency “does not cooperate nor does it maintain contact with any opposition group in or outside the country or with any underground media product or publisher” and “its contacts abroad are only limited to the forwarding of information – in accordance with international practice – to other information channels.” It stipulated as its sole purpose “to inform, with due authenticity and precision, everyone concerned, and those rendered concerned through their solidarity with the destiny of the Transylvanian Hungarians, about the endless terror in present-day Romania.” The first report was drawn-up on 15 June 1983, whereas the last was dated 22 September 1989. The year of foundation yielded the fewest reports (27 items), while the most reports (129 items) were drawn-up in 1987. During its more than five years of operation the private agency drew up a total of 584 reports. Primarily, the agency provided non-officially collected news and background materials concerning the Hungarians of Transylvania, in the beginning only in Hungarian but later in English as well, and thus it became an important information supplier for Western human rights organisations (Erdélyi Magyar Hírügynökség Jelentései 2018; Timár 2018).

Until 1990 Ara-Kovács worked as an editor-in-chief at the Európa Publishing House. In the period 1990–1993 he was editor of the Hungarian-language programme broadcast by the ORF (Austrian Radio and Television) in Vienna, then until 1999 he worked as a political analyst and expert for EuroConnect in Paris and Hongkong. During the 1990s, he cooperated with several Hungarian and foreign magazines, such as: Élet és Irodalom, Magyar Narancs, HVG, Beszélő, Alto Adige, and Die Gemeinde. Between 1999 and 2000 he was editor-in-chief of Szabad Demokrata Hírlap. His public and political activity was determined by the fact that already from the beginning he was drawn to left-wing and liberal ideology. Accordingly, from 1998 to 2002 he was the head of the bureau of foreign affairs of the Alliance of Free Democrats (Szabad Demokraták Szövetsége, SZDSZ). In the meantime, between 2000 and 2002, he worked as a chief counsellor in foreign and security policy for the Bureau of Parliament. He was also assigned diplomatic missions. In the interval between 2002 and 2008, he was first the deputy head and then the acting head of the Division of Strategic Planning and Analysis of the Ministry of Foreign Affairs. Between 2007 and 2013 he was the director of the Republikon Institute – Budapest Centre of Foreign Policy. In June, 2014 Attila Ara-Kovács was assigned by the board of the Democratic Coalition (Demokratikus Koalició, DK) the position of head of their foreign affairs cabinet. As of 2015 he became a member of the party presidency as well. In the past decades, beside his regular activity as a publicist, he has appeared on various TV and radio programmes on a regular basis, voicing his opinion on topics such as foreign policy, geopolitics, security policy, culture, multiculturality, and migration (Ara-Kovács’s blog page 2016).