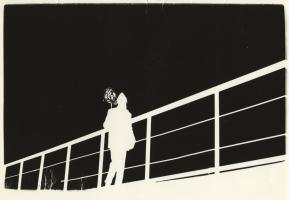 The series of actions Walk to Bolderāja was performed by Hardijs Lediņš and Juris Boiko from 1980 to 1987 every year in a different month. The distance was seven kilometres, from Lediņš' home in Imanta to Bolderāja (both are suburbs of Riga) along a railway line. Each walk had specific rituals or rules, and was documented in photographs, drawings, and sound and video recordings. The walks were personal events, without the participation of a broader audience: the participants were Hardijs Lediņš, Juris Boiko, and sometimes other friends: Imants Žodžiks and Inguna Černova. ‘These actions revealed interests that were important in other works by the NSRD, the processes of time and nature, the periphery, and the importance of personal feelings’ (Ieva Astahovska, Māra Žeikare, 2016, 'The Workshop for the Restoration of Unfelt Feelings: Juris Boiko and Hardijs Lediņš'. Rīga: Latvian Centre for Contemporary Art, p. 137). In 1987, a wider circle of people took part in the walk. The walks were popularized internationally at the 1988 exhibition ‘Riga-Latvian Avant-Garde’ in Berlin, where photographic and video material from all seven walks were presented. The art curator Barbara Straka from Germany praised the walks as a phenomenon of Latvian art, but Lediņš said: ‘They were not intended either as art or phenomena’ (Māra Žeikare [29.06.2015]. Bolderājas stils mākslā. Satori - www.satori.lv/article/bolderajas-stils-maksla). In 2002, to mark the 20th anniversary of the NSRD, Hardijs Lediņš and his friends organized a walk again. Since 2007, some of his friends have resumed the walks, paying tribute to Lediņš and Boiko.