Memorandum addressed to the president of the Presidium of the Great National Assembly, in Romanian, 1948. Manuscript (copy) 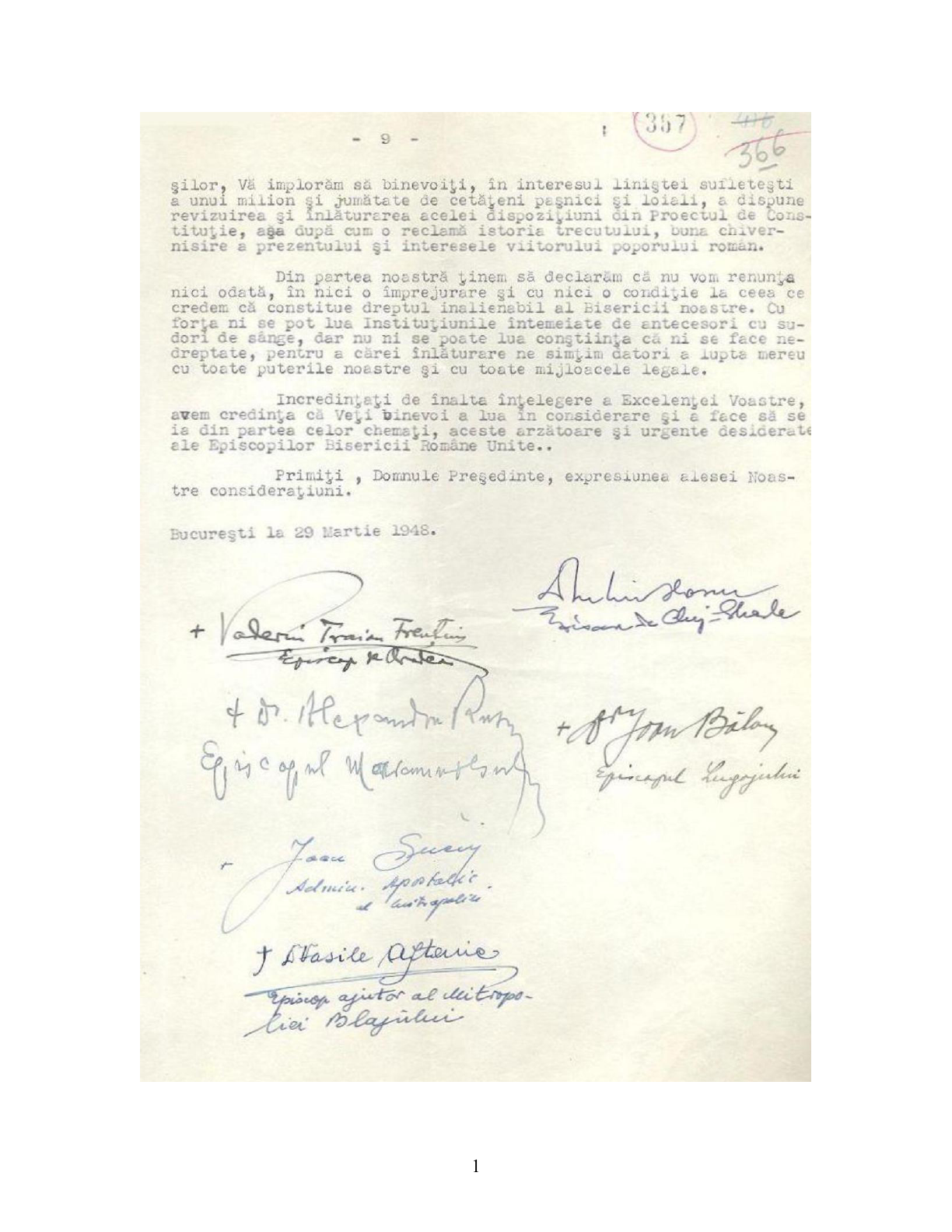 The Memorandum addressed to the president of the Presidium of the Great National Assembly on 29 March 1948 by the six Romanian Greek Catholic bishops concerns those aspects of the project of the 1948 Romanian Constitution which hampered religious freedom in Romania. The six Romanian Greek Catholic bishops who signed the document and assumed the risk of being arrested were: Valeriu Traian Frenţiu (Bishop of Oradea), Iuliu Hossu (Bishop of Cluj-Gherla), Alexandru Rusu (Bishop of Maramureş), Ioan Bălan (Bishop of Lugoj), Ioan Suciu (Auxiliary Bishop of Oradea) and Vasile Aftenie (Auxiliary Bishop and Vicar Bishop of Bucharest and the Old Kingdom.This risk was materialised in the autumn of 1948 when they were arrested and imprisoned by the Securitate for their obstinate resistance to the abusive policies of the communist regime towards their church (Vasile 2002).

In the introduction of the Memorandum the leadership of the Church emphasise the importance of the new Constitution and the real need for social reforms in the country, which the 1948 Constitution included. After this captatio benevolentiae, the six bishops bring to the fore those stipulations which in their opinion could “violate natural and perennial human rights” and the international obligations assumed by the Romanian state through international treaties (ACNSAS, Fond Documentar, dosar FD 8792, ff. 359–360). Their criticism targets especially article 28, the third part of the project of the 1948 Constitution, which stated: “No congregation or religious denomination may establish and administrate institutions of general education, but only special schools aimed at training the staff of the religious denomination under the control of the state” (f. 361).

The argument of the Memorandum is that the stipulations of the third part of article 28 is in contradiction with another part of the same article, which stipulated freedom of religion. By these limitations concerning the education system, the Greek Catholic bishops considered that an important aspect of the freedom of religion was violated. Thus, in their opinion the third part “suppresses those generous stipulations proclaimed previously” (f. 362).

The Memorandum emphasises the natural right of citizens to educate their children according to their values and convictions. The bishops invoke the long tradition not only of Greek Catholic but also of Orthodox confessional schools in Transylvania, and emphasise their importance in the affirmation of Romanian national culture and identity in Transylvania (f. 363). The bishops also emphasise that the confessional schools were attended during the nineteenth century mainly by children of peasant origin and represented a lever for social emancipation for the Romanian population of this region.

In conclusion, the text points out that the decision to abolish the confessional educational system in Romania will be an act of injustice from many points of view and states that: “For our part, we stand firm to declare that we will never give up, in any circumstances and on any conditions, what we believe is the inalienable right of our Church.” All the six Greek Catholic Bishops signed the document, which was addressed to the communist authorities. A copy of this document was attached to the files of the Documentary Fonds, created by the Securitate in order to document the “Greek Catholic issue”.