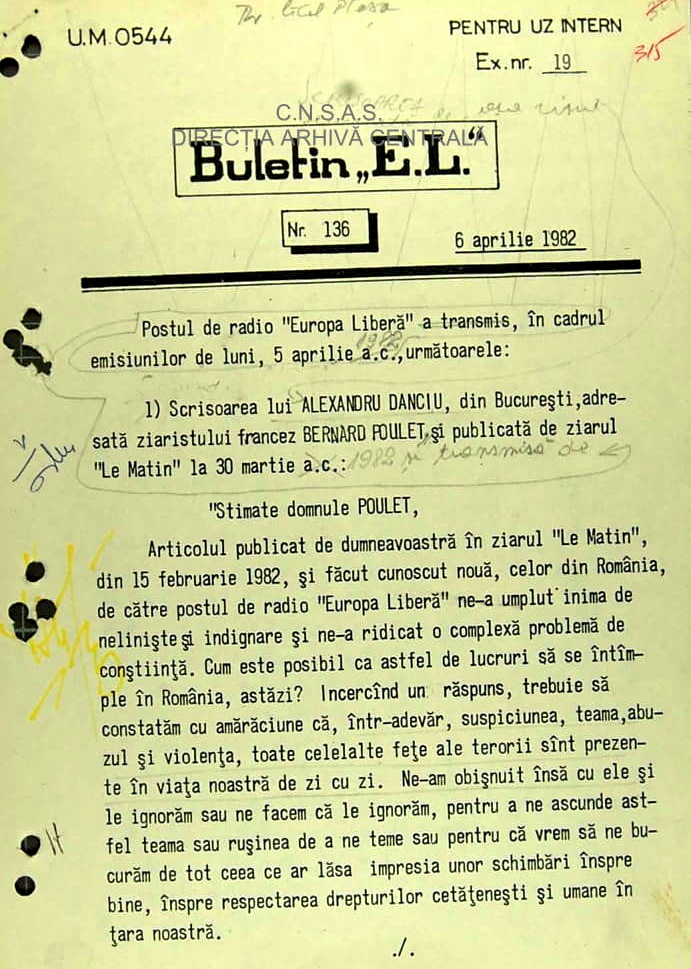 Published on 30 March 1982 by the French daily Le Matin, the article entitled “Le témoignage d’un Tzigane” (The testimony of a Gypsy) was written under the pseudonym “Alexandru Danciu” by Nicolae Gheorghe. A few days later the article was read during one of the broadcasts of Radio Free Europe and it was republished in an issue of L’Alternative magazine the same year. The article was a reply to a contribution of the French journalist, Bernard Poulet, who was attacked and badly beaten when he tried to contact the Romanian dissident Vasile Paraschiv. The official explanation that Poulet got from the authorities was that he had been attack by a group of “Gypsies.” Using as a pretext the false conclusion of the investigation, “Alexandru Danciu” denounced “the methods of the Romanian Securitate to silence political dissidents,” and also “a multilaterally developed prejudice (...) racism against Gypsies.” The latter was used “more and more often by Romanian officials to explain many of the negative developments in the country,” such as the lowering of incomes, the increase in common law offences, and violence against foreigners. In what follows, “Alexandru Danciu” lists the violent methods used by the Militia against the Roma: beatings for “quicker civilising,” home searches and abusive arrests, forced labour on various construction sites, including the Danube–Black Sea Canal, or in agriculture during the summer. After stating that discrimination was part of the daily life of Roma people, Nicolae Gheorghe denounced the refusal of the Romanian communist regime to deal with their serious social problems and to recognise them as national minority. For the authorities, the integration of Roma people into Romanian society was not a viable solution since they saw them “only as a residue of the past, which must disappear through assimilation into the multilaterally developed society.” Most likely Nicolae Gheorghe’s article reached the West with the help of one of his many academic contacts before the Securitate opened an informative surveillance file on him. Its reading at the microphone of Radio Free Europe led to the intensification of the Securitate’s surveillance of Nicolae Gheorghe.