Judicial process against the illegal group "Prizren League" in 1950 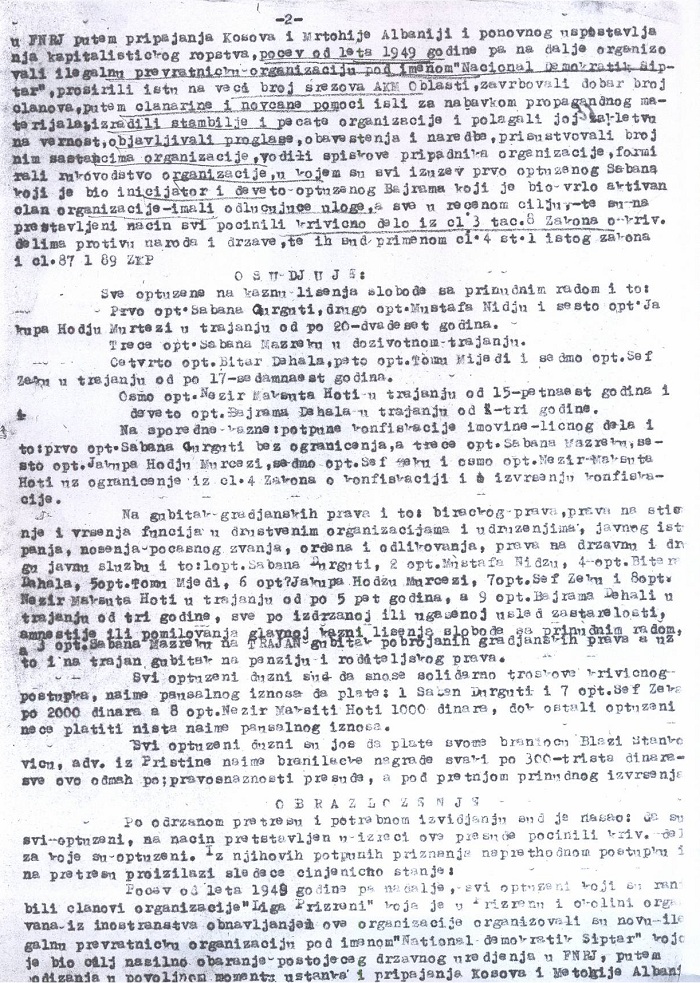 Keçmezi-Basha has also collected and edited court documents. One that is considered to be a highlight of this collection provides information on the judicial proceedings against the Prizren League group in 1950.

The historical Prizren League was an Albanian political organization officially founded on 10 of June 1878 in the historic center of Prizren, Kosovo. One of the main demands of the League was the unification of all claimed Albanian territories within the Ottoman Empire into one vilayet. In the second half of the twentieth century, illegal organizations in regions of Kosovo (including Dukagjini/Metohija) used this same name to demonstrate an association with the historical Prizren League of 1878. The modern Prizren League was guided by famous national figures and intellectuals of the period including Ymer Berisha, Halim Spahiu, Selman Riza, Gjon Serreqi, among others.

It should be noted that this illegal organization’s program mainly aimed at the unification of what it considered “Albanian lands” into one state. In the eyes of the Yugoslav regime, the illegal group threatened the social order of SFRY, which was the main reason for their persecution.

According to documents of the District Court of Pristina, the Prizren League was established during the summer of 1949. The trial was held over 24–26 July 1950, at the same court. Dušan Stanić s head of the jury and Čedomir Ilić and Muharrem Agja as judges. This trial was based on the Public Prosecution's indictment number 79/50 from June 27, 1950, which was presented by Bora Stanojević.
The judge declared the accused guilty and sentenced them according to Article 13 of Yugoslav criminal law. The accused were found guilty of "planning to violently challenge the social order of the SFRY, forcefully joining Albania and returning capitalist order in SFRY".

The following activists were found guilty and sentenced:

1. Shaban Dërguti, a student of agronomy from Rahovec/Orahovac, born 1924. For involvement in illegal activities, sentenced to 20 years in prison.

2. Mustafa Nixha, a clerk from Prizren, born in Gjakova/Đakovica in 1918. He was married and a father of one. Sentenced to 20 years in prison.

3. Shaban Mazreku, a farmer from Suharekë/Suva Reka, born in 1919. He was married. He was held in pre-trial detention since 19 February 1950. Sentenced to 101 years in prison.