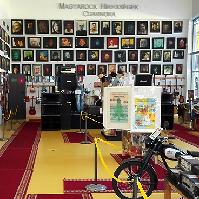 The Rock Museum was established in 2014 as a grassroots initiative by former musicians, experts, and collectors. The museum is the first collection in Hungary that presents documents and items of importance to the Hungarian rock and popular music scene (with an international and primarily regional focus) from the late 1950s to the present. Generally, the phenomenon of rock music under state socialism is considered a form of cultural resistance.